Why we need competition laws in Nigeria 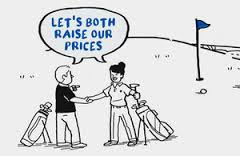 According to the Black’s Law Dictionary, 8th edition, Competition is the struggle for commercial advantage; the effort or action of two or more commercial interests to obtain the same business from third parties. Whish and Bailey describe Competition as a struggle or contention for superiority, and in the commercial world, this means striving for the custom and business of the people in the marketplace

Competition law consist of rules that are intended to protect the process of competition in order to maximize consumer welfare.  In other words, competition law can be described as consisting of rules and regulations which oversee the conduct in which companies carry on business (Whish, Bailey 2012).

In Nigeria, there is no form of competition law in existence and this may make the concept strange to many readers, others may wonder why competition is relevant in the first place. In answering that question, please note that fair competition allows for open, equitable, and just competition between business competitors. Unfair competition on the other hand can lead to –

There is currently no law in the country solely dedicated to competition, even though it exists in some Acts, such as the Nigeria Communications Act. Although there exists a Price Control Act, this only serves to protect consumers of stable and essential items, like sugar, salt, milk, flour, matches, petroleum products, motor vehicles, motorcycles and bicycles’ with their spare parts (“Controlled Commodities”). The Price Control Act empowers the Price Control Board to fix the Controlled Price range for these essential items and makes it a criminal offence for any person to sell any of the listed Controlled Commodities above their approved controlled price[iv].

At a time when Nigeria is currently undergoing a recession and earning power is diminishing among the vast populace, unscrupulous companies can find it ideal to collude and jointly levy on the Nigerian people, a price regime bothering on exploitative.